Hello, lovely people. This is Al, the author of How to Remove Trauma Response. And I wanted to come at you today with a little bit of a scenario. I want you to imagine that you’re sat there in your therapy room or you’re sat at your computer waiting for your zoom meeting to start. And then your client arrives. And what happens when your client arrives is that you notice that they’re dragging in this big kind of hefty machine with them. And they come and sit down and they put the machine down next to them.

And they said, “Well, I bought it the other day and it arrived this morning. I thought I’d bring it in with me. But the TR 2000”, they say, “is a trauma removal machine and I’ve got it off the Internet. It’s just arrived. Thought I’d bring it. Might be useful.”

And you think to yourself, is this legit? A trauma removal machine? So as luck would have it, you happen to be on a WhatsApp group with all of the world’s leading neuroscientists. And so you say to the client, Well, let me just check if this is legit before we go any further with it. So you type your message. You know, this fellow’s just come in. He’s brought a TR 2000, says it’s a trauma removal machine. Got it off the internet. It’s arrived this morning. But is it legit?

Anyway, you wait a few moments and the phone starts to ping and you have a look and all the world’s leading neuroscientists are typing back. They’re like, Yeah, it’s legit.

Wow. And so the client’s just brought this trauma removal machine, the TR 2000, thought it might be useful, so has brought it with them into the therapy room. You’ve checked it out with all the world’s leading neuroscientists and they’re like, Yeah, that’s legit.

So what do you do now? As a therapist and you’re there with the client and their TR 2000 machine that is sat there next to them. And you know that this machine now is legit because you just checked it out with the world’s leading neuroscientists. What do you do now?

Do you kind of ignore the TR 2000? Do you say, Well, that’s all very nice. Now let’s get back to doing what we planned to be doing.

Or would you instead be going: Okay, so this is legit. This removes trauma. How on earth does it work? Would you get really interested in this machine? Like, does it have a manual? Are there certain steps. Are there certain skills that I would need to have in order to use it. Like when you buy a drill, for instance, some people are better at using the drill than others, and you kind of learn how to use the drill more effectively. Is it that kind of machine?

Like, would you get really interested in the machine and try and figure out how it works and how to become really skilled at using it yourself?

And the reason why I use that metaphor is because, okay, they don’t carry in this big clunky machine and it’s not called the TR 2000, but every client is bringing in a trauma removal machine.

It’s not something that they have to go out and get. It’s something that they’re born with. All of us have it, you and me as well. And it’s simply because the way our brains work actually has this machine, this mechanism anyway, and it’s not called a TR 2000, it’s called memory reconsolidation.

And so this has been replicated now over 30 times by various neuroscientists. And in the replication of those experiments and studies, they’ve learned more and more exactly how this mechanism works. And what the mechanism does when it’s triggered is it overwrites the trauma. So the trauma is effectively removed. And so any trauma response that is happening based on what happened to that person is taken away and is replaced with something else.

And so now that we know that memory reconsolidation exists, that it’s our own trauma removal machine, we’re just born with it. Again what do we do with that? Do we just ignore it and carry on as we were before? Or do we get really interested in it?

And so the very reason why I wrote the book, How to Remove Trauma Response, is because if I encountered a machine like that, I’d be like: Well, is there a manual? And so I wanted to provide that manual so you could get into that really quickly.

And the reason why I set this group up is to allow us as therapists to come together and start talking about this, start to spread the word about the fact that this trauma machine actually does exist, and it’s located in our own brains and in our clients’ brains, and we already have it.

What is it? How does it work? What are the steps? What does the manual say about it? How do I get good at using it?

So if you’ve been going down this rabbit hole as a result of finding the group, or if you’ve been pondering these ideas as a result of reading the book then you can ask your questions here. You can talk to other people here. So please do start asking some questions. Please do put some comments underneath this. Now that you know that this trauma removal machine exists, what does that change for you as a therapist, as a coach, as a change maker, and let me know.

The Trauma Removal Club: From Frustration To Mastery For Therapists & Coaches
A monthly coaching program at a super low price. Click here to find out more. 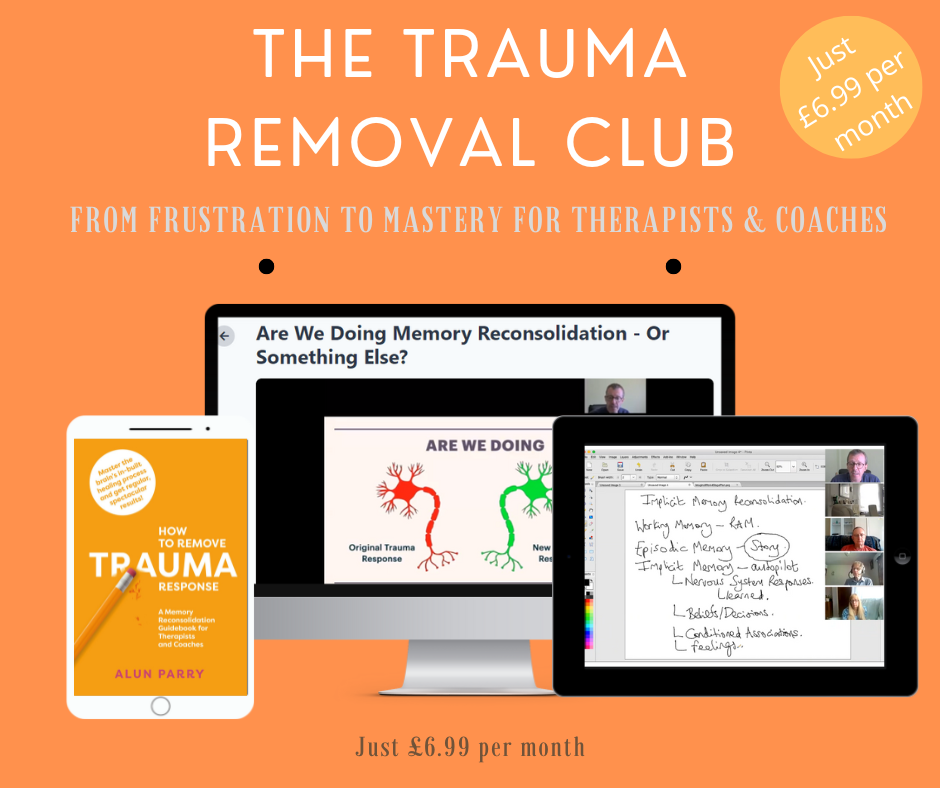 How To Remove Trauma Response: A Memory Reconsolidation Guidebook For Therapists & Coaches by Alun Parry
Get my 5 star rated top selling book on trauma removal. Exclusive Coaching: The Memory Reconsolidation Elite Coaching Academy is exclusively for therapists who are committed to becoming experts at removing trauma. THE DOORS ARE CURRENTLY CLOSED UNTIL 2023. Click here to learn more