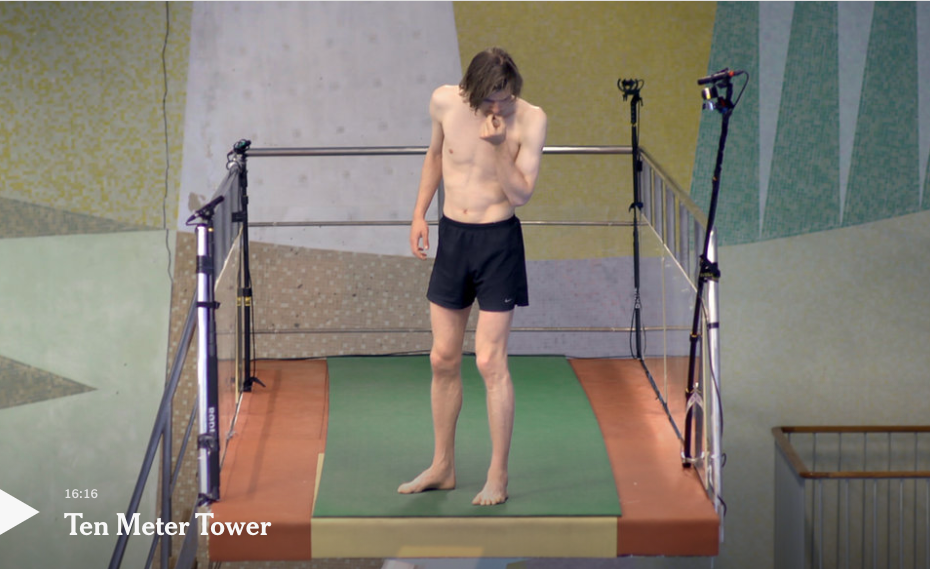 I want you to see what trying to make change looks like when the autonomic nervous system is screaming “NOOOO!!!!”

I want you to see just how much energy each person puts into making that leap, and how hard their own nervous system is fighting them.

This is how it is for our clients whenever they try to change. Why? Because the nervous system believes the change is dangerous.

Here’s the movie, then there’s some more commentary underneath.

The goal of psychotherapy is to trigger memory reconsolidation. This is the brain mechanism that literally overwrites trauma responses. A huge element of trauma response is the activation of the autonomic nervous system.

In the preparation stage of memory reconsolidation, our aim is to discover. We find out what the problem is. This is the issue that brought the client to therapy. But we also want to understand why it makes sense that the problem keeps showing up. Why not just change?

This is what I refer to as the Monster In The Corridor problem. We see it whenever it appears that a client is self-sabotaging their success. But they are not. They are protecting themselves from something they believe would be even worse.

Overcoming the nervous system can happen of course. But just look at the energy it takes. Is it realistic to ask our clients to keep having that battle day in day out?

Think of a client who wants to have better self-esteem. Yet as a child, every time she would get “too big for her boots” her mother would beat her and insult her. It makes sense that her nervous system panics any time she thinks well of herself. Back then, showing signs of self-worth was dangerous.

For that client, making the change to better self-esteem is like being stood on the edge of a ten-metre diving board.

Attempts to merely befriend the nervous system seem flawed. Watch the video again and you will see how limited in scope that idea is. See how powerful the nervous system response is, and why the lense of polyvagal theory is so invaluable to understanding our clients.

Yet this is how clients who have experienced trauma live. It’s also why the discovery of memory reconsolidation is so profound and significant.

Rather than battle the old responses of the nervous system to things that are no longer dangerous, we can turn those responses off. Rather than managing their trauma, our clients can literally erase it.

Triggering the brain mechanism of memory reconsolidation sets people free. They are no longer stood on the edge of the diving board facing a powerful trauma response. They get rid of it completely and for good.

Imagine how easy it would be for each of those swimmers to take that leap if only they believed it was safe. Our clients face their own leap. It is no less scary. Memory reconsolidation reprograms those old nervous system responses so that they feel safe whenever they are safe.